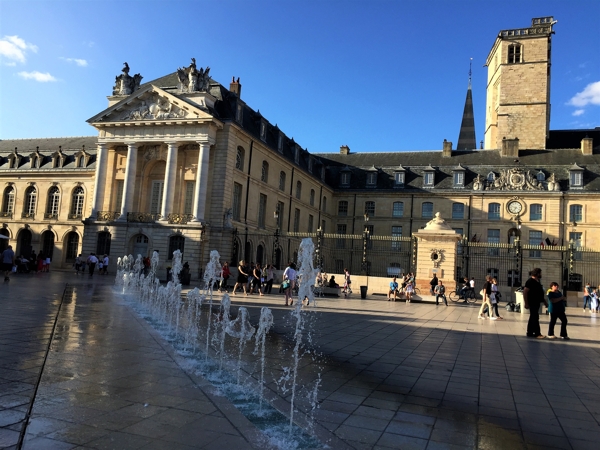 Years ago, there was a popular commercial on television. Two limousines are stopped at an intersection. The windows roll down and one obviously rich gentleman asks the other, “Do you have any Grey Poupon?” The occupant nods and presents a jar of  Dijon mustard.

I have always equated Dijon with that spicy golden spread and really nothing else. We just got back from a visit to Dijon, France and it is so much more. As we walked along its meandering cobblestoned streets, we discovered a city famous for its wines, cuisine, and history. In fact, Dijon is the capital of the Burgundy wine region, although Beaune (just down the road) is perhaps a better bet if you’re serious about hunting the grape. The city is bursting with ancient half-timbered buildings that look straight out of your average French fairy tale. And the colorful tilework on many of the roofs is gorgeous.

Dijon is very compact and foot friendly and the best place to start your visit is at the Dijon Tourist Office at 11 Rue des Forges. They have a nifty little guide called The Owl’s Trail that directs you on a self-guided tour of the city. The Owl of Notre Dame de Dijon is the city’s symbol or mascot. Owls are everywhere in the form of magnets, tea towels, or little porcelain figures. But the most important one is the weathered, stone carving on a corner of the cathedral on Rue de la Chouette, (appropriately named Owl Street). Legend is if you touch the figure with your left hand, and make a wish, it should come true. The jury is still out on that since I have not won the lottery (yet). The guide book, along with a trail of small owl-embellished brass plates in the sidewalk, points the way. This is an excellent way to see all the pertinent sites in the city and we will cover just a few of our favorites.

Les Halles is the covered market in Dijon. The imposing ironwork structure is lovely and very reminiscent of the Eiffel Tower in Paris. Gustave Eiffel (who was originally from Dijon) designed the building. We’ve been to many covered or indoor markets in various locations, but this was one of the best. The selections of meat, fish, produce, cheese–oh, that glorious cheese!–and baked goods were some of the finest we had ever seen. Not only did the quality look fantastic, but the presentation was as much of a feast for the eyes as it was for the palate. The market is held on Tuesday, Thursday, Friday and Saturday each week. We were there on a Saturday and the market extends way beyond the interior of this beautiful edifice and into the surrounding streets. Vendors selling all types of vintage to modern items occupied stalls for a couple of blocks in every direction. Haggling is encouraged and we bargained and purchased a vintage desk calendar with a bronze figure of a gentleman playing a game of Petanque, sometimes called Boules in Paris.

Place Francois Rude
Smack dab in the middle of the old part of the city is a charming square. It is named after the French sculptor Francois Rude who was born in Dijon. Rude is famous for his sculptural frieze La Marseillaise emblazoned on the Arc de Triomphe, in Paris. The plaza comes complete with a vintage carousel, a wonderful fountain adorned with a sculpture of a well-muscled young man stomping wine grapes, and charming half-timbered buildings. It is the perfect place to sit at a cafe and enjoy a cup of coffee as you watch some of the local parents treating their children to a ride on the antique merry-go-round.

Place de la Liberation
In the center of Dijon sits the impressive Place de la Liberation. This semi-circle square is anchored on one side by the palace of the Dukes of Burgundy and there are fountains of water that seem to shoot up randomly from the ground. It is a pedestrian-only area, and another great place and stop at any of the numerous cafes to rest your feet after a long day of walking. We were lucky to be there on a beautiful sunny day, drinking a glass of wine and watching the children and some of the local dogs romping in the fountains.

The imposing Roman Catholic Church of Notre-Dame was built in the 13th Century. The exterior has 51 gargoyles gracing its facade. At the top of the exterior is a clock called the Jacquemart. It has four metal automatons. Two of them, called Jacquemart and Jacqueline, sound the hours by striking a large bell with a hammer. The other two, their children, Jacquelinet and Jacquelinette, strike the quarter hours, each on a smaller bell. Inside the church, the stained glass casts a beautiful shimmering light through lovely gothic arches. And the impressive organ

loft has a gorgeous tapestry complementing the massive bank of organ pipes that are a work of art in their own right.

To cap it all off, we had a view from the window of our small apartment that was really spectacular. There is so much more to Dijon than just mustard and more than I have room for here. Why don’t you make a visit to this wonderful and often overlooked city for yourself!