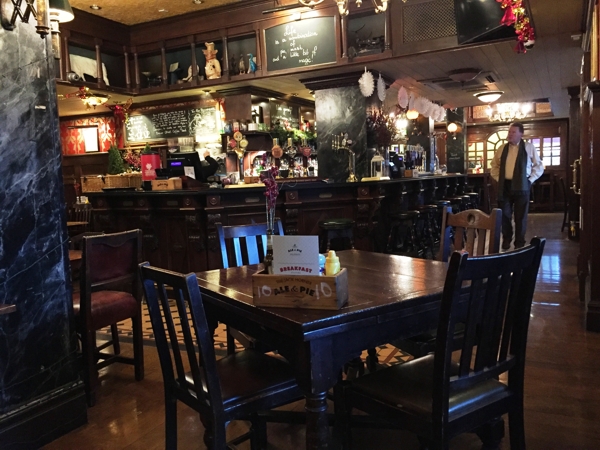 I’ll admit it up front, I’m a sucker for Fuller’s beers. This is especially fortunate because London has a lot of Fuller’s pubs. They have become quite a large brewer but they have not lost the knack for making very tasty brews. However, a visit to a pub is certainly more than just an excuse to drink beer and a good pub has to have a bit more going for it than a line of beer engines on the bar. I like a pub that makes me want to have a seat and relax. The Jack Horner in Tottenham Court Road is one such place. When we were in London over Christmas, we stayed in a flat in Fitzrovia and the Jack Horner was right on our most common walking route.

Staying in a flat was great but it was not without a downside. Whenever we have stayed in hotels in London (or elsewhere in the U.K.) they have almost always included a full English breakfast. Renting a flat meant we were on our own. So when we spotted an item on the menu posted outside one of the doors as we walked past the Jack Horner one morning touting a full English breakfast starting at 8:00 am (9:00 am on Mondays), we decided we needed to investigate further. The barmaid handed us a menu with a number of tasty options but there was really only one choice for me—the Full English.

I have to say that one item on the bill of fare gave me a moment’s pause. I had never eaten black pudding and it’s not something that struck me as particularly appetizing. But I have spent a lot of time in the U.K. and I love pub food, so I reasoned that this represented a gap in my education that needed filling. For those unfamiliar with the finer points of English culinary practice, black pudding is an English form of blood sausage, typically made from oatmeal, pig’s blood, fat, spices, and sometimes barley or oat groats. In a breakfast context, it’s usually sliced and fried. I’ll try (almost) anything once.

If you’ve never eaten a full English breakfast, you should try it at least once in your life. In this case, it consisted of eggs, bacon, toast, baked beans, half a grilled tomato, a large grilled portobello mushroom, sausage, and black pudding. Not surprisingly, this will probably fuel you through a whole day, even if you walk all day long. It was all very nicely prepared and I must admit, the black pudding was good. I don’t think I would go out of my way to find it but I’ll eat it if it turns up with my breakfast rations again. A pot of tea to wash it all down and we were set for a full day’s exploration.

We liked the Jack Horner and decided to have dinner there later in the week, an easy choice as it was only a few minutes’ walk from our flat. It is certainly a comfortable and inviting establishment. A long and attractive mahogany bar greets you as you enter. I counted a total of twelve beer engines, although some selections (notably London Pride and ESB) were offered on multiple pumps. Still, there was a good variety of Fuller’s ales on offer, and that is never a bad thing. Lots of mahogany wainscoting and comfortable seating made for a warm feeling and there were snug little spaces throughout the interior. We settled down to a table, got comfortable, and started perusing the menu.

The Jack Horner is one of Fuller’s Ale & Pie Houses, so there was an emphasis on pies in the menu. I ordered the Ale & Pie Tasting Board while Mary settled on chicken and chorizo pie (sadly no longer offered) and a cider. I really like pub food and to me, pies are the most eloquent expression of the genre. They are typically served with mash (mashed potato in American), and a small pitcher of gravy. Many people would think that this is a bit too much starch, but it works. I actually got two varieties of gravy with my sampler and both were delicious. I was a bit leery of the vegetarian pie but it was excellent. The steak and ale pie was quite tasty, as I have come to expect in Fuller’s pubs. The chicken and chorizo was probably my least favorite of the three in the sampler, but still quite enjoyable. The three ales were ESB, London Pride, and Seafarer’s (in a Frontier lager glass for some reason) and all three were delicious, though I have to say the London Pride would be my choice with a meal.

I intend to include write-ups on other pubs we have visited, but the Jack Horner was a good choice to start with. It’s a good, friendly pub in a great location. The Fuller’s ales are well kept and the food is delicious and filling. I admit to a bias here. I love well-prepared meal and I’ve enjoyed some memorable dining experiences in restaurants from Portland to Paris. But sometimes you just want comfort food and few things fill that bill for me better than a good steak or chicken pie and a glass of well-brewed ale. Cheers!